SOUTH SAN FRANCISCO, Calif., October 3, 2016 — Profusa, Inc., a developer of tissue-integrated biosensors for continuous monitoring of body chemistry, today announced that it received the CE Mark to market its Lumee Oxygen Platform™ for continuous, real-time monitor­ing of tissue oxygen. The company will initially market the system for monitoring tissue oxygen in the treatment of peripheral artery disease (PAD). With an annual economic burden of more than $74 billion dollars in the United States alone, PAD affects 202 million people worldwide. PAD leads to narrowing of blood vessels and reduced oxygenated blood flow that can result in amputation of an extremity.

“Acquiring the CE Mark is a major milestone our development team and regulatory partners have worked hard to achieve,” said Ben Hwang, Ph.D., Profusa’s chairman and CEO. “Thanks to their dedication and commitment, vascular interventionalists in Europe can now have a rev­olutionary monitoring device that enables them to better treat their patients and improve their quality of life.”

In addition to allowing for European sales and marketing, the CE Mark lays the regulatory path for multi-center clinical studies that will be conducted in Europe and the United States to support Profusa’s application for U.S. marketing clearance by the U.S. Food and Drug Admin­istration. Results obtained from an initial study of the Lumee showed it successfully reported local tissue oxygen levels during surgical intervention, as well as post-operatively for 28 days in patients with PAD. Moreover, the device posed a low risk to patients during the study (J. Vasc. Surg., June 2015, Volume 61:6, 1501-10).

Decreased tissue oxygen levels in the lower limbs of PAD patients can lead to disabled walking, or in more advanced cases, gangrene and amputation. The Lumee may help salvage limbs from amputation by providing the medical practitioner with a way to continuously measure tissue oxygen levels in the ischemic limb before, during, and after treatment, enabling appro­priate therapy to be administered in a timely fashion before advanced symptoms appear.

“The muscles and other tissues of the arms and legs need oxygen and nutrients to function properly,” explained Miguel Montero, M.D., Associate Professor of Surgery, Division of Vascular Surgery and Endovascular Therapy at Baylor College of Medicine. “In PAD the arteries that feed the extremity are blocked by plaque composed of cholesterol and other calcified substances. When low tissue oxygen is detected early, more treatment options can be considered and the need for catastrophic amputation can be avoided.”

Placed under the skin with a specially designed injector, each tiny biosensor is a flexible fiber 5 mm long and approximately 500 microns in diameter. Made of a bioengineered “smart hydrogel” (similar to contact lens material), the fiber forms a porous, tissue-integrating scaffold that induces capillary and cellular in-growth from surrounding tissue. The smart gel is linked to a light-emitting molecule that signals the presence of a body chemical such as oxygen, glucose, or other biomarker. Rather than being isolated from the body, Profusa’s biosensors work fully integrated within the body’s tissue — without any metal device or electronics.

The Lumee Oxygen Platform is comprised of novel hydrogel biosensors, a specially de­signed biosensor injector, an optical reader, and a touch-screen user interface. Adhered to the skin’s surface or held by hand, the optical reader is used to read the fluorescent signal from the embedded biosensor. The reader sends light through the skin to the biosensor, which then emits fluorescent light proportional to the concentration of molecules of interest. The data is relayed to the touch-screen tablet computer for an encrypted personal record and historical tracking.

Profusa’s biosensors can have many applications for consumer health and wellness, as well as the management of chronic diseases such as PAD, diabetes, and chronic obstructive pulmonary disease (COPD). 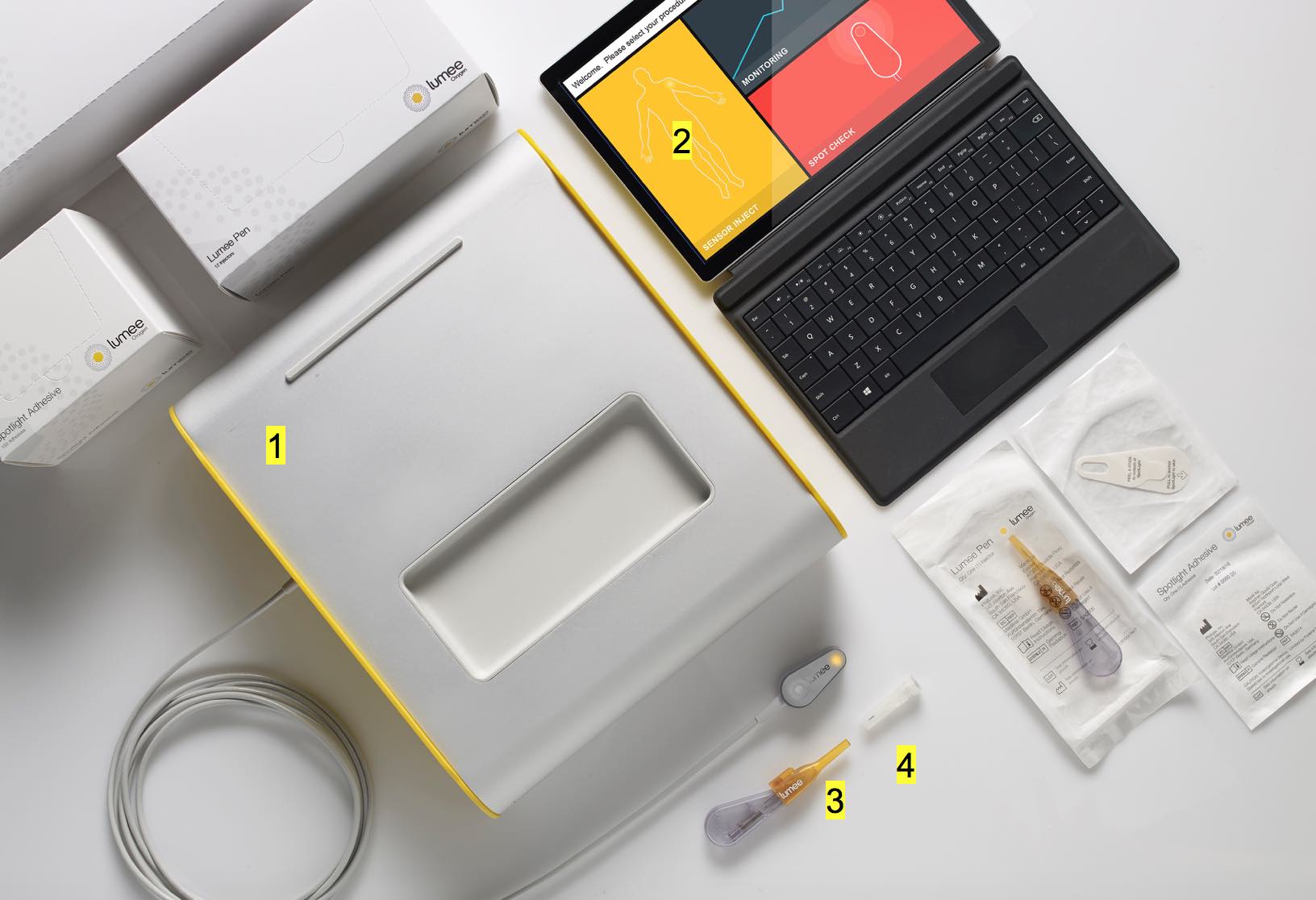 Profusa, Inc. is leading the development of novel tissue-integrated sensors that empowers an individual with the ability to monitor their unique body chemistry in unprecedented ways to transform the management of personal health and disease. Overcoming the body’s response to foreign material for long-term use, its technology promises to be the foundational platform of real-time biochemical detection through the development of tiny bioengineered sensors that become one with the body to detect and continuously transmit actionable, medical-grade data for personal and medical use.

Funding for development of the Lumee Oxygen Platform was supported in part by Small Business Tech­nology Transfer and Small Business Innovation Research grants provided by DARPA; and the National Heart, Lung and Blood Institute, a division of the NIH.

The Lumee Oxygen Platform is an adjunct instrument intended for continuous and long-term monitoring of the oxygen in the subcutaneous tissue in the upper extremity, shoulder, or lower extremity. It is indi­cated for use in patients with potential acute and/or chronic changes in tissue oxygen levels who may benefit from monitoring. It should not be used as the sole basis for diagnosis or therapy. Investigational Device Limited by United States Law to Investigational Use.